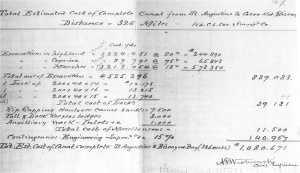 In 1888, Florida canal company general manager George F. Miles engaged acclaimed Chicago waterway and railway engineer Elmer Corthell to survey the soil, rock, sand, and other material the Company dredges would likely encounter in completing the waterway and to estimate the cost of completion.

In turn, Corthell employed a former Army engineer, Artur [sic] Wrotnowski, to perform the actual on-the-ground measurements between bodies of water, their depths, and distances, with calculations of how much material the Florida canal company would have to move to comply with state requirements. Corthell reviewed Wrotnowski’s survey in detail and reported to the directors of the Florida canal company the amount of material to be moved and the cost to complete the waterway.

Corthell also considered mounting marine vessels on railway cars to transit difficult-to-dredge dry land between waterways but rejected the railway alternative as too expensive to maintain. In conclusion, Corthell endorsed the project on a ‘pay as you go’ basis, starting with minimum depths now, using the waterway to generate revenue to dredge a deeper and wider waterway later.  Withal, Corthell thought the Florida East Coast economy robust, more than enough to justify his estimated cost to complete of a little over $1 million in  1889 ($26 million in historic standard-of-living dollars today, 2014). Courtesy, Brown University, Hay Library, Providence, Rhode Island.